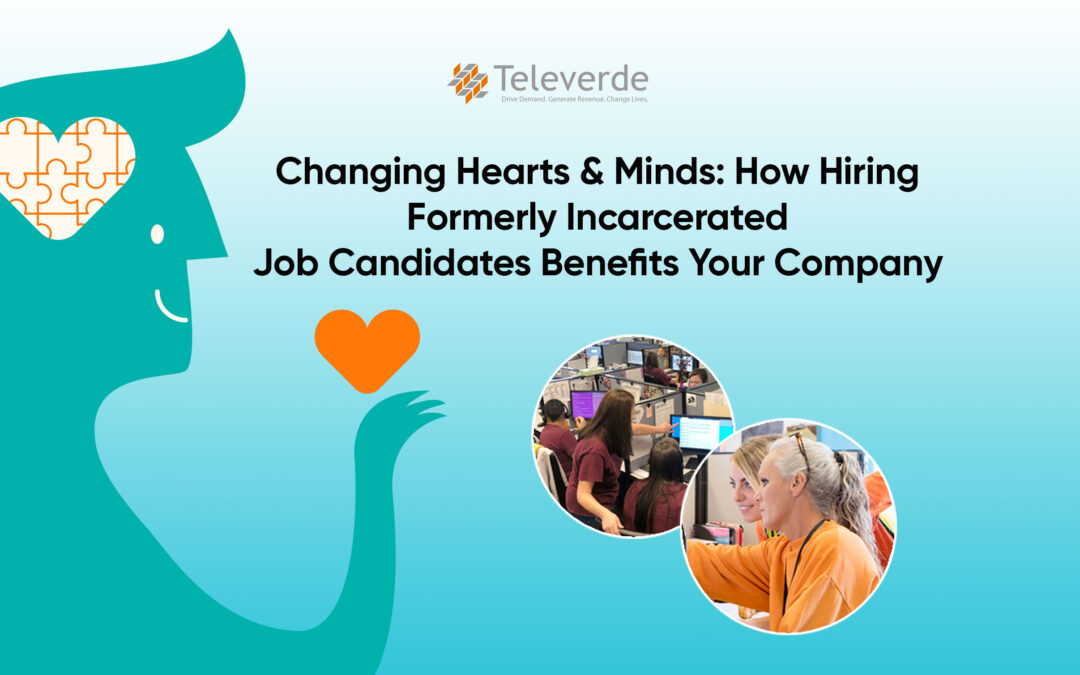 The Unseen Metrics of Diversity and Inclusion

Diversity and inclusion initiatives should also focus on the formerly incarcerated population, as a way to expand their focus beyond race and gender to see improved effects.

“I would encourage business leaders to let go of some of those preconceived notions and stigma. I’ll admit when I first heard about the model Televerde has, I didn’t know what to think,” said Genefa Murphy, CMO of Intelligent Cloud Contact Center Five 9. “Sometimes you don’t want the people who’ve come from the big monopolies or who look perfect on paper. Those can be great people, but the people who have to fight a little bit more, who have to put more passion, energy, more self into it, those are the people who are going to work so hard for you, and I’ve seen that in abundance with Televerde.”

A striking statistic: one in three Americans have been arrested by age 25 and over 2.3 million people were part of the American criminal justice system in 2020 alone.

Organizations that integrate second chance hiring practices are broadening their candidate pool by more than just the 2.3 million Americans who interacted with the criminal justice system. More than 77% of candidates assess company culture when considering a job offer. Second chance hiring offers companies a way to differentiate themselves in the market, and a way to measurably increase their diversity. This not only attracts discerning job candidates, it can improve innovation, provide a diversity of experiences across all levels of the organization, and can attract investors that place environmental, social, and corporate governance factors high on their list of investment determinants.

The Golden Rule in Hiring Practices

Sudhakar Ramakrishna, CEO of SolarWinds suggested executives can make the most out of their hiring practices when they follow practices they would want to be subject to as a job candidate.

“If you spend half a day with the people there, you will be inspired by it, not just satisfied, but inspired. [Televerde employees] are extremely curious, they have an optimistic outlook, an incredible work ethic, what’s not to like about that? It’s not about substituting some other great talent, it’s just looking at talent for what it is, not so much where it is,” he said. “Outside of the fact we were restricted by law on certain things, we treated them like our employees. And that gave me a competitive edge, even against people who were using Televerde because of how we treated those people as our own.”

The women Sudhakar has hired through the Televerde program are some of the hardest working individuals he has ever met, he said. They have what he describes as a ‘chip on their shoulder’ – a singular desire to right past wrongs and become a source of pride for themselves and their family. That competitive differentiator has been a source of success for his past companies that brought on Televerde.

Make No Mistake – This Isn’t a Selfless Effort

Dave Abel, president, and CEO of Aventiv Technologies, sought to clear something up on this webinar: he isn’t working together with Televerde for entirely selfless reasons.

Aventiv is not working with Televerde to check a diversity and inclusion box but because of the women’s profound dedication to the work at hand. The Televerde team can quickly and easily pick up the skills and domain knowledge necessary to sell their solution – much quicker than other hires have, Dave Abel said.

Solving the problem of economic insecurity for those recently released from prison is complex, multi-layered, and will require dedicated and years of effort. But there are steps organizations and individuals can take toward a solution.

“Whether you are a hardcore, punitive-focused person or a rehabilitation-focused person, it is clear that our system of criminal justice is not producing the outcomes we’d look for, based on the expense we contribute to it,” Dave Abel said. “This is one of many tools that we and others are able to approach people with to help move us in a rehabilitative direction.”

“[Second-chance hiring] is really meaningful for you as a company; for the people you are giving the chance to, and the business results speak for themselves,” said Morag Lucy, CEO of Televerde. She went on to quote former Televerde CEO, Jim Hooker, by saying “Don’t judge people by the worst mistake they made on the worst day of their life for the rest of their lives – give them another chance.”

We encourage you all to watch the webinar and help be a part of a solution for groups of women who have contributed so significantly to the businesses these executives have led.