Brooke Shafer- How it Started; How It’s Going 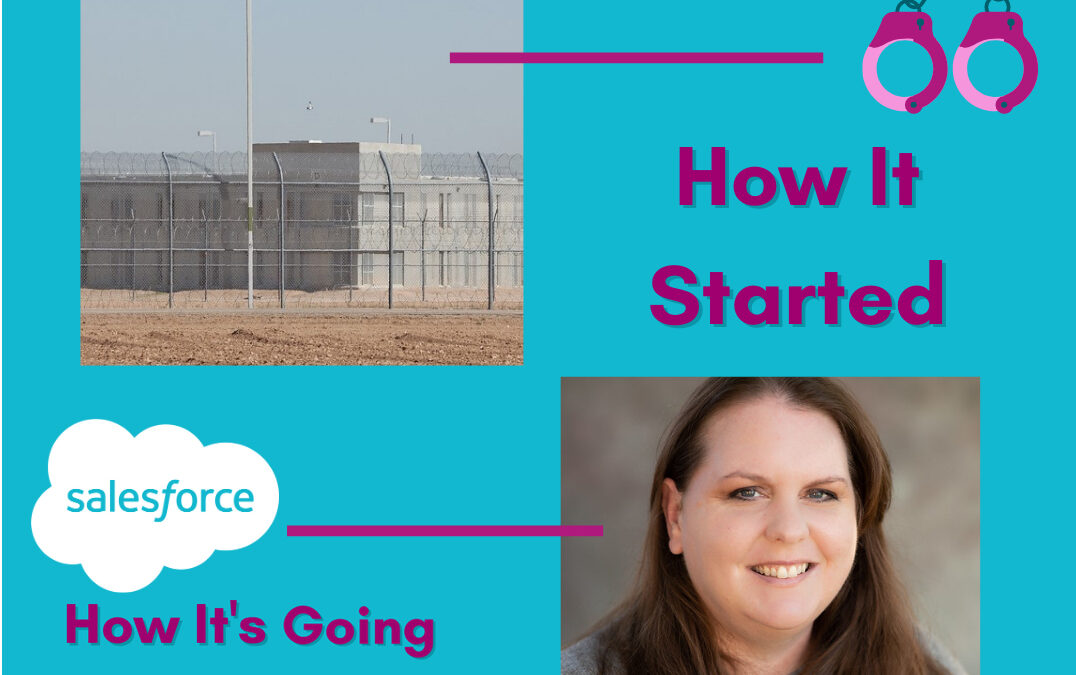 Brooke Shafer will be the first to tell you people like her don’t usually end up in prison.

“Nobody had ever been in trouble, let alone arrested, let alone gone to prison! So not only am I shaming the family name, no one knew how to react,” she said, with a laugh. “I’m college educated, middle class, white… people like me don’t go to prison! I was definitely out of my comfort zone. I needed to figure out what am I going do with my life for eight years, who am I?”

Brooke tried lots of paths on her way to figuring out what she wanted to do.

“I worked in a call center for ADOT (Arizona Department of Transportation), answering calls. At my five-year mark, I knew I was going to a unit with Televerde,” she said. “I knew I didn’t want to be on the phones. The great thing about Televerde is they have a ton of different positions.”

Brooke would try several different positions with Televerde before landing on Salesforce.

“By the luck of the draw our Salesforce admin was taking another position and they said ‘Hey, you’re coming home soon, what do you think about this?’” she said. “I owned it, and now that’s what I do for Televerde, I’ve been doing it for about 18 months. I absolutely love it.”

Brooke said she felt broken when she came to prison – unsure of what to do, what the next eight years would look like, and what life would be like after release. But through work with Televerde, and support from Televerde Foundation, she said she felt ready to face whatever came next.

“About nine months before I graduated and came home, I started in the Foundation’s PATHS Program. It had classes on emotional IQ, relationships, finance, rebuilding credit, purchasing a car. I always called it feelings class, but it was practical advice,” she said. “And too, when you’re getting closer to release, they’re asking hey do you have housing, do you have someone to come pick you up. It’s small things like that you start stressing about.”

For Brooke the lasting benefits of her time within the Televerde community go beyond a steady paycheck and a job she loves.

“I went to dinner with a friend last week who relapsed, but who is doing better. She said to me, I have people I could call. This could have gone deep down, dark, but she had people to call who said hey, we love you, let’s get back on the right track,” Brooke said. “And that’s so missing, it’s not just the skills, it’s the network, that safety net. I know that if I’m hungry and don’t have money I have a ton of people who will take me out to lunch, or who will help me budget, so I don’t end up here again. It’s really wraparound services with Televerde Foundation.”

It’s small things, Brooke said, that are what she’s enjoying most about her life now.

“Every once in a while, I’ll be driving around, and I’ll realize oh my gosh, this is real! It’s getting to know my kids again, playing with my puppy, eating great food, nothing extravagant,” she said. “But I realized that what’s really important is people. Being intentional in those relationships. And relationships take time, I don’t think I realized that. You make time for what’s important.”

Two months post-release, Brooke is starting to settle into her new life, unpacking leftover boxes, setting up a home office, and setting goals for herself.

“Seeing the example of women who’ve been out for 10, 20 years, and how successful they are, it makes me feel like, okay, I can set goals and just because I’m out doesn’t mean I’m done,” Brooke said. “It’s crazy to think that it’s only been two months, it seems like so much has happened, but it’s been so great. I’m happy. I’m able to do what I want to do, whatever I want. I love it.”